Although double-lanyard systems remain a seemingly obvious answer for moving horizontally on many present structures without the provision of horizontal lifelines, their use is cumbersome.  An interesting variant used in Japan employs a simpler system that includes a keybox attached to the worker’s belt.  One lanyard key is inserted and remains attached until a second lanyard key is inserted in another opening.  This action ejects the first lanyard key and allows unhindered transfer past obstructions or supports while ensuring continuous protection.

It is important to point out that the Fall Protection Code was not written for professional rescuers, such as fire, police and ambulance personnel.  The standards were developed for PFAS users and manufacturers.  While rope rescue by professional rescuers may be the last resort after other rescue means are considered and/or tried and rejected, Z359 standards are written for equipment users as planned rescuers.  Therefore, the emphasis is placed on planning for emergencies as part of the overall fall protection program.  It is important, however, that the rescuers be trained in the latest treatment methods for suspension intolerance.

OSHA scaffold regulations are currently found in the 1926 and 1910 standards.  Most scaffolds are governed by 29CFR1926, Subpart L.  This standard applies anytime a “construction-type activity” is to performed from the scaffold.  This is true even in general industry (1910 type) facilities. The location of the scaffold does not determine the standard applicability, but rather the activity to be performed on the scaffold.

Workers need training to understand the rules and how they apply in real life situations.  They frequently are simply unaware of dangerous situations such as equipment compatibility problems, the consequences of a sudden free fall or the possibility of impact  with a stationary object.  Workers must be trained that safety is their responsibility and that taking the time to do a job properly is the safest way to protect themselves and their coworkers.  To achieve this, training must provide hands-on opportunities for workers and managers. Workers should also be trained to understand why their work will be observed in the field and why they will be required to undergo additional training if they do not meet expectations on a recurring basis.

The Superior Court of Justice in Ontario, Canada recently sentenced a roofing company owner to 15 days in jail (in addition to other sanctions) for the fall death of one of his employees.  The employee, who was wearing a harness but was not tied-off, was both experienced and recently had undergone fall protection training.

The Court considered it’s ruling a warning to all employers as it held, in part, “The major reason a jail sentence is necessary for (the owner) is to deter others from ignoring the legislated fall protection requirements.  Others in the industry must pause to consider that each and every time they embark on a roofing project they may go to jail if one of their employees does not use fall protection gear.”

Unless the fall event occurs directly underneath the horizontal lifeline, additional lateral loadings will be produced in the anchorages due to offset from the lifeline centerline. The magnitude of these forces is directly related to the offset distance and should be set equal to the maximum vertical load encountered in the line for the total number of workers on the system.  This  load shall be applied in either direction at the end anchorage for analysis and design purposes.

Termination hardware and other accessories also should be checked against the anchorage load  to be certain that the entire fall arrest system meets OSHA requirements.

The primary rule is to apply fall protection when the height hazard exceeds a reasonable figure of a few feet – or at any height, if continued exposure is not preventable. The responsibility of the equipment vendor to educate an end user is limited by the extent that the customer (i.e., the end user’s employer) has a bona fide no-fall policy rather than a tie-off policy, which is common among employers.  It also depends upon the manufacturer’s instructions, labeling, and product literature, and whether the employer and employees follow these items for reasonably foreseeable or permitted uses.  Workers must be provided with, and be required to read and understand, product instructions and labeling on fall arrest equipment.

The choice of snaphooks to link rope-grab components is a vital safety matter.  Only instructions from the manufacturer of the rope grab should be followed to ensure  the hardware is compatible.  No other snaphooks should  be  used to avoide potential roll-out or burst-out.  Other parts of this book address the problems of mixing and matching and misuse.  All snaphooks should be of self-locking design, maintained in optimum operating condition, and discarded if they are jammed or damaged.

If a manufacturer’s snaphook instructions for use and inspection are not crystal clear, a new manufacturer should be sought.

Ladder rungs or steps, and guardrails or railings of any kind, should not be used for fall arrest anchorages unless they are designed and  labeled specifically for that purpose.  Steel members should be used for anchorage-point structures whenever possible.  Masonry fittings can be suitable when used with through-bolts and plate washers.  Expanded anchor bolts should  be specified by a registered professional engineer.

It should be noted that a manually operated mechanical device could  be utilized optimally at a lift rate of 10 to 20 feet per minute under demonstration conditions.  Remember that the object of the retrieval process is to extricate the worker within 4 minutes, the rule-of-thumb limit for the onset of brain damage from oxygen deprivation.  Therefore, when manually powered hoists are used to provide access from more than a 50-foot depth, a pneumatic operation should be the primary lifting force.  Another factor in the 50-foot limit is the static, muscle work duration for upper-body cranking, set at approximately 30 pounds when non-stop for several minutes (5:1 ratio with 12-inch lever arm). 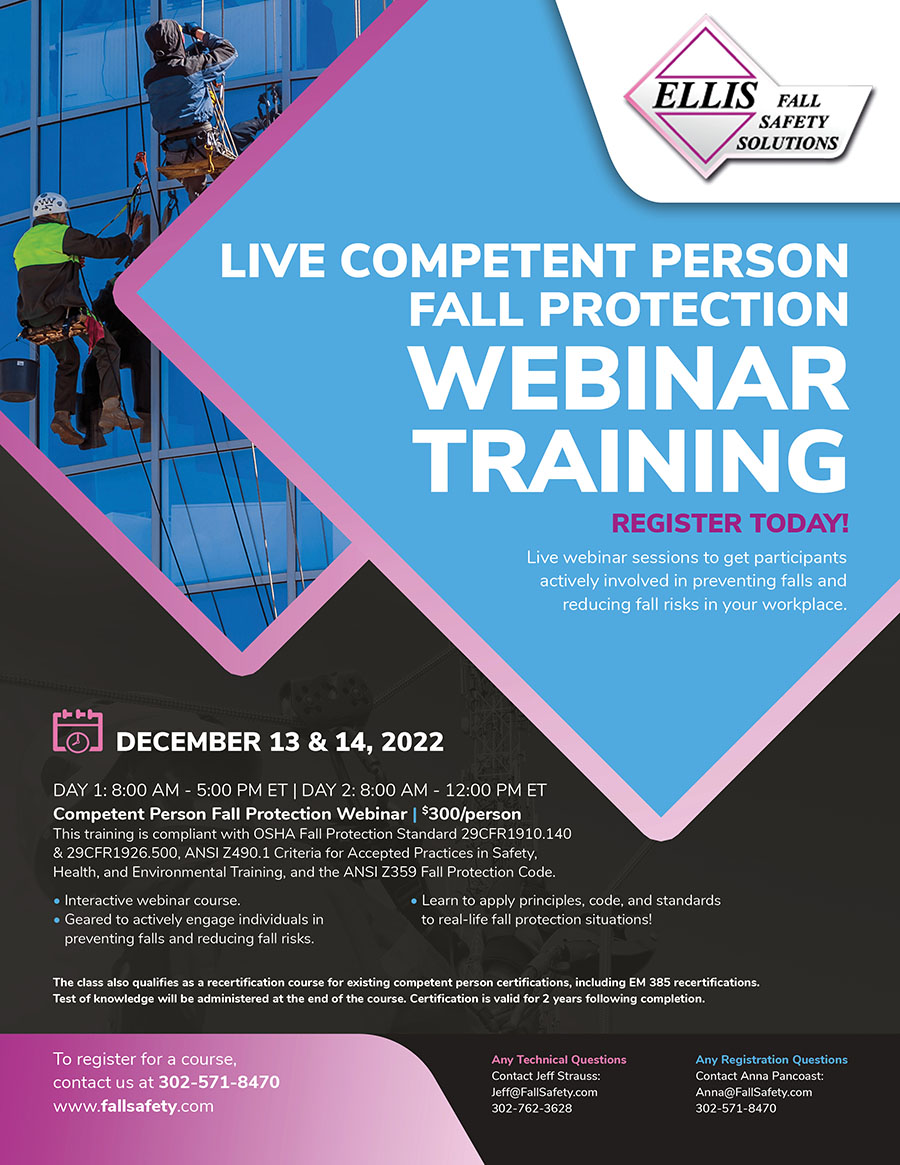 Register For This Course Here

This class also qualifies as a recertification course for existing competent person certifications, including EM 385 recertifications.
Test of knowledge will be administered at the end of each course.Certification will be valid for 2 years following completion.